Today we celebrate Palm Sunday….It is the Triumphant Entry of Christ into Jerusalem just one week prior to His resurrection.

This event is one of the few that is mentioned in all FOUR Gospels.  Putting the four accounts together, it becomes clear that the triumphal entry was a significant event, not only to the people of Jesus’ day, but to Christians throughout history.

2 million Jews gathered in the City of Jerusalem to begin the Feast of Passover….the celebration of God’s mighty hand of deliverance from Egyptian bondage. For 1500 years they had been gathering to commemorate this significant event…..but something was about to happen that would CHANGE this celebration forever.

What was being celebrated in SHADOW was going to show up in FLESH! Religious practice was going to be replaced by FAITH…. Ritual was going to give way to REDEMPTION….ready or not, HERE HE COMES!

They had been waiting for Messiah to come.  Many had prophesied this day, neigh sayers and doubters refused to believe that Israel’s King would ever come…..but here He was.

He was not cowering in fear and hiding from those who would oppose Him….He was going to MAKE AN ENTRANCE!

Making an entrance is His specialty!  (For someone in this place this morning—He is going to make an entrance!  Ready or not…Here He comes!)

The Jews had been WAITING….but they were not READY.

There are a lot of people that are WAITING…but they are not READY! Readiness requires the ability to DISCERN your moment!

When your moment comes—you have to DO something!!!

WAITING and READY are not the same thing….Ready people MOVE when their moment comes!  (Ready or NOT!)

When Christ is going to make an ENTRANCE—He goes looking for something to USHER Him in.

Jesus had WALKED from place to place His entire ministry…but not today!

He wanted them to know that THE King had come!

He was not just “another” King…and He was not interested in setting up a temporal Kingdom.  THE KING “OF” KINGS had come!!!  And He was bringing His Kingdom WITH HIM!

Only Kings made an entrance like this…only Kings rode into the City!Jesus was making the declaration through time and eternity… the King is not “coming,” Ready or not, the King is here!!!

He did not come surrounded by an army…but that does not mean He came alone.

Earthly Kings would have come surrounded by their armies, signifying their power and authority. But He was not accompanied by an army of conquering hero’s and fierce generals…rather, He rode in accompanied by much greater forces, the most superior forces that mankind had ever known.

The horrors of sin and death had chained the hearts of men since the Garden of Eden…but His Banner declared that a NEW SEASON had arrived…PEACE had come!

He was ushered in on a colt that had never been ridden…it had not be “tamed” by human hands. God is looking for a people that are still wild in Spirit, people who have not been broken by the “bridles” of religion. Unrestrained and unfettered, these are Remnant people who will fully usher in the King!

His instruction was that they “untie” the colt and bring it to Him.

God is sending His Spirit to LOOSE those who he has called to USHER in his Kingdom!

They may not be your front-runners, but like David they have been on the backside of the farm WAITING to be LOOSED.

The Spirit has gone looking for those long haired Nazarites that aren’t looking for the keys to the city… they are ready to rip the gates right off the city and declare that the KINGDOM of God has come!

Every time He “sits” AUTHORITY is being declared.

In (Luke 4) when Jesus entered into the temple—He took the book and He began to read “The Spirit of the Lord is upon me, because He hath anointed me to preach the Gospel to the poor; He hath sent me to heal the brokenhearted, to preach deliverance to the captives, and recovering of sight to the blind, to set at liberty them that are bruised, To preach the acceptable year of the Lord.”

And then He closed the book…AND SAT DOWN and said “This day is this scripture fulfilled in your ears.”

He was the fulfillment of the Word….and when He sat down he was declaring that the chains of a thousand years were being broken!!!

In (Acts 2) the Bible says that “When the day of Pentecost had fully come, they were all with one accord in one place.  And suddenly there came a sound from Heaven as of a mighty rushing wind, and it filled the house where they were sitting.  And there appeared unto them cloven tongues as of fire, AND IT SAT upon each of them.”

The moment the Spirit SAT DOWN—he was declaring THE KINGDOM has come to earth…and those who have turned the world upside down ARE COMING TO A CITY NEAR YOU!

Oh God, if you need a place to SIT DOWN…SIT DOWN HERE!!!

(Vs. 8)  The multitude spread their garments and cut down branches from trees and they cried “Hosanna!  Blessed is He who comes in the name of the Lord.”

His presence demanded PRAISE! They laid everything AT HIS FEET!

This praise could only come from the crowd that was gathered.

Look closely…and you will see WHY this praise had to go up. These were not casual bystanders or distant acquaintances….these were people who had been TRANSFORMED by His touch!

THIS WAS THE CROWD…A lot like the one that is gathered here today!!!

They weren’t just an audience…they were a TESTIMONY!!!  And that testimony had to give birth to PRAISE!!!

WHEN HE COMES… Everything is MOVED.

When He comes—the City is moved! When He came as a baby in a manger and the Magi came looking for him, the Bible says that “All Jerusalem was TROUBLED.”

Cleansed the temple of unrighteousness. Called it a House of PRAYER

When He comes there will be a generational awakening.  (Vs. 16)

When He shows up there will be a generational revival. A “Perfected Praise” is going to come from the hearts of a generation that RECOGNIZES that the King has arrived!

READY OR NOT…HERE HE COMES! 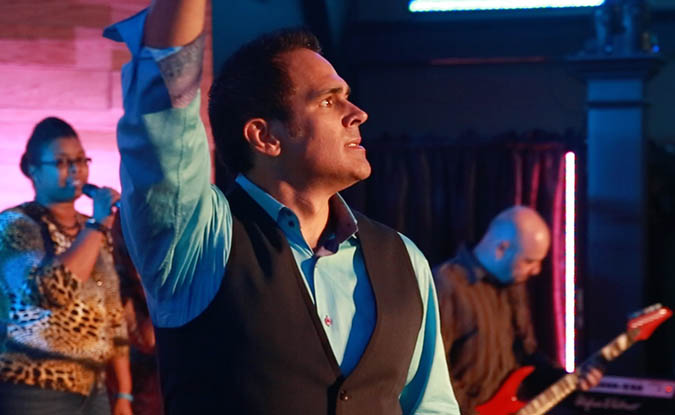